Dear beloved in Jesus,
Greetings from Guntur, India.
Hope you are doing well. Thank you for your prayers and your love.
We are glad that the Lord has given us the wonderful opportunity of serving Him. Last week on April 22nd and 23rd we had the privilege of doing a gospel outreach in four villages. We went as a team of six members from Guntur and four people were added to our team in the village of Batluru. A former student from the orphanage by the name ‘Sivaiah’ and his wife hosted us in the village of Batluru. Sivaiah is working as a registered medical practitioner in this village.

Totally ten of us went from house to house distributing the tracts and verbally explaining the gospel to the people. We printed a new tract in Telugu which is especially targeted to people from Hindu religion, and it appeals to them, challenges their belief system and presents Jesus Christ as the answer to the problem of sin and eternal punishment.

The first day was spent wholly in the village of Batluru and we had a gospel meeting in the night in the same village. There was heavy rain in the morning and we thought that it would be a hindrance to visit every house. But God turned it into a blessing, as the people who had gone to work in the fields around the village came back to their houses and stayed there the whole day because they were unable to work when it was raining. So we had more people than usual, and we took the opportunity and did not stop visiting the houses even in the rain.

We met many people who showed an interest in Jesus Christ, many of the them responded positively. There were a few arguments with some. But overall we were glad with the experience. Some of us learnt some new things as to how to present the gospel to different people.

A person came to us and said that he wanted us to pray for him as he was suffering from a physical infirmity. We counseled him and told him that getting healed from ‘spiritual sickness’ was more important than physical healing and taught the gospel to him. In Andhra Pradesh there is a lot of emphasis on healing and miracles rather than the Truth about Jesus Christ.

After the night gospel meeting, we were invited by a higher-caste Hindu (Brahmin) family to speak in their house. About 15 people gathered in that house. They had some superstitious ideas about Jesus Christ and we corrected them and told them the true reason why Jesus had come into this world.

On the second day 23rd April we visited three villages namely ‘Gorantla’, ‘Kumparlapadu’ and ‘Rentapaalla’. This day was really hot. We went from house to house sharing the Gospel. We encountered some opposition. Some people said “We are not proclaiming our gods to you, then why are you proclaiming your God to us?” They returned back some of the tracts that we had given to them.

We thank you for letting us share our ministry experiences. We also thank you for your support and prayers and we hope that the Lord will use us together increasingly for His purposes in future.

Please pray for the ministry in Andhra Pradesh in which about 84 million people live.

66.5% of the total population (about 56 million) still lives in rural areas (villages). There are about 28,000 villages in our state. Our desire is to reach every village in the state of Andhra Pradesh with the Gospel of Jesus Christ.

Pastor Philip Samuel visited our church 2008. You can read about his visit in Finnish here and what he wrote then about his work in English here. 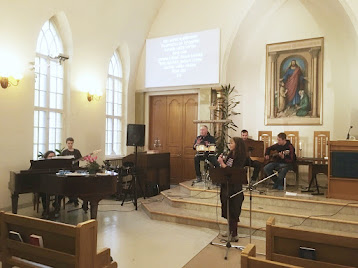 The church services are in the Baptiskyrkan premises in Raastuvankatu 44, Vaasa. The entrance during the Sunday services will be by the main door from the street and for the Wednesday services through the back side of the building at the inner yard.